Nonconformist meetings commenced in Kettering around 1666 following the 1662 Act of Uniformity. It was at that time that Mr Maydwell, the Rector of Kettering, left the Parish Church to establish the Independent Meeting.

The first entry, undated, in the Old Church Book lists amongst its members a Mr William Wallis who, together with six other members, was dismissed from membership (29th October 1696) for being an Anabaptist. These men set up their own fellowship in a house in Bayley's Yard, Newland Street, with William Wallis as their pastor. This small group was the first Baptist Church in Kettering, from which the Fuller Church ultimately grew.
At about the same time a second Baptist fellowship was established in Goosepasture Lane (now Meadow Road) under the leadership of Mr Wills, formerly pastor of the Independent Meeting but also dismissed from membership.

In about 1729 the two separate Baptist meetings merged, meeting together for worship on the common basis of believers' baptism and open communion.

After a while the church was in need of its own burial ground but the buildings in Goosepasture Lane had little or no land attached. Mr Beeby Wallis (great grandson of William Wallis), made available to the church his house, warehouse, barn, stable yard and gardens situated in Gold Street, worth a total of £350 but bought by the church for £139 14s 9d.

By 1775 the membership had risen to 75 under the leadership of George Moreton of Arnesby. Following Mr Moreton's resignation due to ill health, a young minister named Andrew Fuller was approached. Fuller was minister at Soham at the time and was reluctant to leave his small flock but, after consulting with nine of his fellow ministers, Andrew Fuller eventually and reluctantly accepted the call and, together with his family, moved to Kettering in October 1782.

Andrew Fuller brought life and vigour to the church. He was a prolific writer and a powerful preacher. By 1786 it was considered necessary to enlarge the Chapel at a cost of £133. In the same year a daughter church - Gretton Chapel - became independent of the Kettering church.

1792 was to be a memorable year in many ways. It saw the beginning of a new era in missionary work with the formation of what was to become the Baptist Missionary Society, but it was also a year of two great sorrows - the deaths of Beeby Wallis and of Fuller's own wife.

Two years later Andrew Fuller married Ann Coles, the daughter of the Revd William Coles of Ampthill and found in his new wife "the perfect helpmeet".

By 1805 a further rebuilding of the Chapel was required. It was lengthened by 18 feet and the walls raised by 4 feet. The completed chapel now held 900 people.

Andrew Fuller died on Sunday 7th May 1815. It was estimated that 2000 people attended his funeral.

In 1851 the Sunday School had 534 children attending on Sunday mornings and 625 in the afternoon. Gas lighting was introduced into the Chapel in 1846. Revd James Mursell, whose ministry began in March 1853, had an "exciting and innovative" ministry. It was during his time that the new chapel was built. The Fuller Chapel, as it was named, opened for worship on 24th September 1861.

In July 1891 the foundation stone of a mission hall in Nelson Street was laid. This was to become what is now known as Carey Memorial Chapel (Carey Baptist Church).

Here in the 21st century the work continues as we serve our Lord and Master in various ways, reaching out into our local community through church activities, working within the town centre and in the Fuller Coffee House.

More in this category: 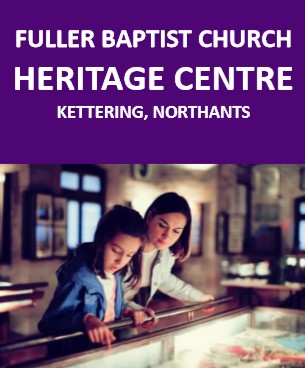 Built with from JoomlaShine